Quite some time ago, I wrote Sweetie Pie Baby: The Diaper Rash Disaster, describing my horrible problems with diaper rash. I figured I would write a subsequent blog post when I figured things out and found a solution to diaper rash…but that never really happened.

What I can do is explain the discoveries I did make and tell you how I chose to handle the situation.

I mean, I did get the situation under control…but only sort of.

So with no further adieu, here’s what I’ve learned about dealing with diaper rash while cloth diapering:

HE Washers are the Worst!

I am all for being environmentally conscious, but I also need the tools that I work with to work. Is that so much to ask?

Apparently it is for an HE washer. And I don’t care if there’s an “HE” setting and a non-HE setting. If it’s an HE washer in any capacity, it probably won’t work very well washing cloth diapers. Without an agitator and the proper amount of water, the diapers don’t get as clean as they need to be.

And yeah, I did all the tricks. I soaked a big towel in water and threw it in with the diapers to trick the HE washer into thinking there was more laundry in the machine. That way, the HE washer used more water, which meant my diapers got a fraction cleaner than they would have otherwise.

I stripped my diapers, I put GSE in with my diapers (Grapefruit Seed Extract), I experimented with the amount of detergent used, and which cycles to run. But regardless of what I tried, my daughter got more diaper rashes while I lived with that HE washer than she ever did when I had a normal one.

When we moved, I made sure we rented a townhouse with a normal washer. That was absolutely a requirement. It’s funny, because I saw a number of rental listings advertising their new HE washers and nothing turned me off faster.

Now, since I did a lot of research on the subject during the year that I lived with that non-agitating bane of my existence, I did find people out there who claimed to have no problem with their HE washers and cloth diapers. But I certainly wouldn’t recommend going that direction.

If I went back in time and had to deal with that HE washer all over again, I would probably do a lot of hand washing before I threw the diapers in the machine. That might be gross, but I think it would have helped cut down on the diaper rashes.

To be honest, I’m not entirely sure what type of rash my daughter was getting. At one point, my doctor thought it might be yeast, so I jumped on that bandwagon like a left-behind banjo player. Anything to blame something that was out of my control!

I did a ton of research and tried all sorts of anti-bacterial “solutions.” GSE in the wash, GSE in a homemade spray, Water Wipes with nothing but water and GSE in the ingredients, baking soda baths, Nystatin prescribed by my doctor, oxidized bleach in the wash, and charcoal cloth diapers that were said to have anti-bacterial properties.

I’m going to be honest with you: none of that made much of a difference. Maybe her rash got a little better for a bit, but there was nothing that really fixed the problem. One good poop that sat in her diaper a little too long, and the rash was back with a vengeance. And when I say a little too long, I mean something like fifteen minutes.

If you know your kid has a yeast rash, I would recommend the baking soda bath. Just pour a bunch of baking soda in a warm bathtub full of water. Don’t expect it to fix anything. However, the rash shouldn’t hurt your kid quite as much after the bath as it did beforehand, and at least you were able to do something to help.

I’d recommend the Nystatin as well, if you can get to your doctor and your doctor is willing to prescribe it. Again, I never found that the Nystatin completely fixed the problem, but it did seem to help a little more than simple diaper rash cream during the time I’m fairly certain my daughter had a yeast rash. On a side note, you can’t use it with cloth diapers, so you’ll need to switch to disposables when you apply the Nystatin cream.

The Saving Grace of Disposables

I really hate to admit this, but I think Pampers and that yellow wetness-indicator saved my butt…or in this case, my daughter’s. 😉

My mom showed up with a huge package of Pampers diapers and demanded that we put them on my daughter along with her baby legs (ie leg warmers for babies/toddlers), and watch for the yellow wetness-indicator like hawks. Pampers isn’t the only diaper out there with a wetness-indicator. It’s just the one my mom happened to find.

Anyway, I complied, because at that point, I didn’t know what else to do. My daughter’s rash had gotten really, really bad. I even tried to potty train her, but at eighteen months old, my daughter was terrified of her little potty. I wanted to let my daughter run around without a diaper on, because everyone told me that was the real solution, but I was living at my mom’s house at the time, and pee on the carpet just wasn’t an option.

So the hawk-watching-pampers-experiment began. After about a week of changing my daughter’s diaper the second we saw that yellow indicator, the diaper rash started going away. We went through a ton of disposables very quickly, but two weeks later (if I remember correctly), the diaper rash was gone!

I do want to put a major disclaimer here: I don’t believe the cloth diapers were causing the diaper rash. And I don’t think putting a kid in disposables solves anything. Before the hawk-watching-pampers-solution, we had our daughter in disposables for about two months because I was really pregnant, and then had a newborn baby, and really couldn’t handle the cloth diapers at the time. During that time, we were still fighting diaper rash. It wasn’t quite as bad as when we were using cloth diapers washed in an HE washer, but it was definitely still a problem.

I’ve come to the conclusion that my kids just have really sensitive skin, and until they’re potty trained, diaper rash is something we have to deal with. The rash shows up when their diaper is left on too long, when they’re cutting a tooth, and when their cloth diaper isn’t cleaned well enough.

So How Do I Deal with Diaper Rash?

Well, that’s the question of the day, isn’t it? Currently, when one of the kids gets a little red, this is what I do to immediately remedy the situation before it gets worse:

1.I take their diaper off. Air time seems to be the number one solution allowing a kid’s bum to heal. Hands down. Now, that doesn’t work for everyone. We currently have a rug remnant down in our living room, and the rest of the first floor isn’t carpeted, so as long as the kids stay downstairs while their little bums are airing out, we’re happy. We don’t let them go too long without their diapers, so we really don’t have too many accidents. But when we do, I find a carpet cleaner meant for pets goes a long way on the rug remnant and lysol wipes work great on the hard floor. At least for now, we’re in a good position to make this work.

As far as Diaper Creams on the Market, I Think I’ve Tried Them All…

2.I put coconut oil on their rash for soothing relief. Organic coconut oil

is cloth diaper safe and seems to work just as well as other cloth diapering diaper creams, if not better. However, I haven’t found that either do much towards making the diaper rash go away. They just seem to make the kid’s bum feel better. I like the coconut oil because I know exactly what it is and what I’m putting on my kids.

3.I put regular diaper cream on at night with a disposable diaper. I’ve tried so many different brands of zinc oxide diaper creams, and they all seem to help a bit, but none of them stand out as a miracle worker. I typically purchase Boudreaux’s Butt Paste

because I don’t mind the smell and they do have a natural product option. I like Honest Company’s

too, but like I said, I’m judging on the smell and feel of the product here. They all seem to do the trick as far as keeping the moisture from making the rash any worse. Because that’s what these zinc oxide diaper creams do. They basically put a moisture shield on the skin. But if you put the cream on when the skin is wet, the shield will also lock that moisture in, and that’s not what you’re going for.

4.I don’t use night time cloth diapers anymore. I used to be convinced that they worked better for night time than disposables, but since I switched to disposables at night, I’ve cut down majorly on the amount of diaper rashes I have to deal with. The disposables simply wick the moisture away better for a long night without a diaper change. Even though cloth diapers claim to do the same thing, they don’t. At least, not in my experience. I tried doublers, stay-dry liners, diaper brands that advertised better long term absorbency, etc. And while they all did a great job controlling leaks, they really didn’t do anything to keep my daughter’s bum dry throughout the night. I thought they worked great and were the miraculous reason my daughter slept through the night at such an early age.

Nope, she just likes her sleep. Reminds me of someone…. 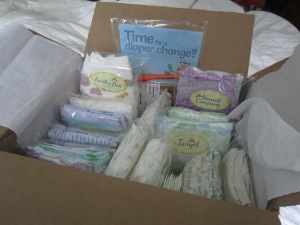 Our Teetering Toddler sample pack of disposables from Diaper Dabbler

To find the right disposable that worked for my heavy wetter, I used Diaper Dabbler’s Teetering Toddler sample pack and wrote about it in my blog post, Sweetie Pie Baby: How to Find the Right Disposable Diaper. I’d like to say that I always purchase biodegradable, natural diapers for our night time use, but that’s far from the truth. I typically purchase Huggies because I can get them at the grocery store, I usually have a coupon, and they were my favorite mainstream, name-brand diaper in the sample pack. But seeing as how my kids’ cloth to disposable diaper ratio is something like 7:1, I think I’m doing okay in the environmentally friendly department.